This is a series where I try to write the synopsis of a movie BASED SOLELY on my ratty childhood memories of it. 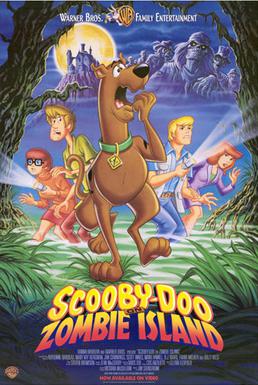 So Scooby-Doo and the gang have split up and gone their separate ways… wait… isn’t this the plot of the live-action movie? Hmm not off to a good start… Okay, so Daphne and Fred are like in a random marketplace or something and this girl naaaamed… Leyla?… tells them that she lives on an island in the Louisiana bayou and that the island is TRULY HAUNTED. Daphne who is… like an investigative news reporter now, for some reason, is like YO! LET’S GO! And they have to gather the gang back up, which apparently isn’t hard once they tell Scooby and Shaggy about all the Gumbo that they will eat there.

So this gruff riverboat guy takes them to the island where Scooby gets into a fight with a catfish for some reason. And then they meet Leyla and her sister… um… blonde Leyla. Blonde Leyla is pretty hospitable, except that she doesn’t like Scooby because he’s an icky dog.

Daphne immediately goes into the kitchen to film some like reporter thing. And while she’s filming, a civil war ghost appears and carves “GET OUT” on the wall with his sword. So Daphne takes a spoon and starts scraping the wallpaper off (Lol is this memory even real?). Leyla is like WTF IS WRONG WITH YOU WHY ARE YOU DESTROYING MY KITCHEN?! And that’s when Daphne is like Hey this wall has been made from an old pilgrim ship… or something like that.

So anyways, one night, zombies start chasing them. And there is a SUPER COOL THEME SONG THAT PLAYS. And then I think maybe Shaggy falls into a pit or something? Iono. But the sun comes up and the zombies, like, slink back into the mud and disappear.

So probably some other stuff happens and mystery-solving that I don’t remember. But then they discover that Leyla and Blonde Leyla are actually… evil cat people (???). And gruff riverboat guy is actually an evil cat person too! So they’re stuck on the island. And all the cat monsters have been trapping people and sucking out their souls and turning them into zombies… I think to be able to live forever or something? And also I feel like there’s some big monologue about how their feelings were hurt by pilgrims or whatever.

Anyway, Scooby saves them somehow, but I don’t remember. I think he breaks their little green scepter thing that sucks out their souls… No, wait… that’s the live-action version again…

Um. Scooby saves the day and gets a Scooby Snack. THE END!

GOES AND READS THE ACTUAL SYNOPSIS

One thought on “Trying to Remember: Scooby-Doo on Zombie Island”