This is a series where I try to write the synopsis of a movie BASED SOLELY on my ratty childhood memories of it.

So Scooby-Doo and the gang have split up and gone their separate ways… wait… isn’t this the plot of the live-action movie? Hmm not off to a good start… Okay, so Daphne and Fred are like in a random marketplace or something and this girl naaaamed… Leyla?… tells them that she lives on an island in the Louisiana bayou and that the island is TRULY HAUNTED. Daphne who is… like an investigative news reporter now, for some reason, is like YO! LET’S GO! And they have to gather the gang back up, which apparently isn’t hard once they tell Scooby and Shaggy about all the Gumbo that they will eat there.

So this gruff riverboat guy takes them to the island where Scooby gets into a fight with a catfish for some reason. And then they meet Leyla and her sister… um… blonde Leyla. Blonde Leyla is pretty hospitable, except that she doesn’t like Scooby because he’s an icky dog.

Daphne immediately goes into the kitchen to film some like reporter thing. And while she’s filming, a civil war ghost appears and carves “GET OUT” on the wall with his sword. So Daphne takes a spoon and starts scraping the wallpaper off (Lol is this memory even real?). Leyla is like WTF IS WRONG WITH YOU WHY ARE YOU DESTROYING MY KITCHEN?! And that’s when Daphne is like Hey this wall has been made from an old pilgrim ship… or something like that. 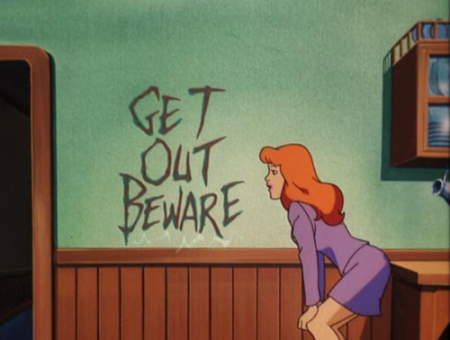 So anyways, one night, zombies start chasing them. And there is a SUPER COOL THEME SONG THAT PLAYS. And then I think maybe Shaggy falls into a pit or something? Iono. But the sun comes up and the zombies, like, slink back into the mud and disappear.

So probably some other stuff happens and mystery-solving that I don’t remember. But then they discover that Leyla and Blonde Leyla are actually… evil cat people (???). And gruff riverboat guy is actually an evil cat person too! So they’re stuck on the island. And all the cat monsters have been trapping people and sucking out their souls and turning them into zombies… I think to be able to live forever or something? And also I feel like there’s some big monologue about how their feelings were hurt by pilgrims or whatever.

Anyway, Scooby saves them somehow, but I don’t remember. I think he breaks their little green scepter thing that sucks out their souls… No, wait… that’s the live-action version again…

Um. Scooby saves the day and gets a Scooby Snack. THE END!

GOES AND READS THE ACTUAL SYNOPSIS

The other day, Dan was asking me about Kiki’s Delivery Service. (You know, one of those two in the morning conversations.) And something occurred to me…

THIS MOVIE THAT I HAD WATCHED LIKE EVERY DAY AS A CHILD WAS BARELY IN MY BRAIN ANYMORE. How can that be possible? I know I’ve seen this movie more than a dozen times. So what? Fifteen little measly years can go by and erase this BEAUTIFUL CLASSIC MASTERPIECE FROM MY LIFE???

So, I had an idea. (You know, one of those two in the morning ideas.) What if I tried to explain the movie with only the vague bits and pieces that I remembered? And ALSO what if I embarrassed myself by making it a whole series on my blog?

Beautiful. Let’s do it.

Okay, so there’s this witch with a big red bow and a black cat. And she lives with her… family (???) in the woods (?????). And the family is like, Hey now, your power is flying on a broomstick so you need to go and do something with your life and… help people probably. So, I guess this child witch has come of age and ventures off to… venture, I guess.

While she’s flying around looking for a place to be a witch, she runs into another witch flying along with a white cat. She tries to talk to her, but the other witch BLATANTLY SNUBS HER. And she’s like WOW what a little B-witch. And then that witch character never appears in the story again… I’m pretty sure…

Okay, then she ends up in this… French looking town? And finds a bakery and tells the old woman, “Hey, I can help you deliver your rolls by flying all around town.” And the old woman says, “Cool. You can live in my attic if you want.”

So, she… delivers bread around town… getting to know townspeople and stuff. And like helping them? Okay, maybe I’m actually thinking of Pollyanna… I don’t know. I legit am getting a headache, I am trying SO FREAKING HARD TO REMEMBER THIS.

Um, alright, so there’s a nerdy boy with a striped shirt and they become friends. And… some stuff happens… and she can’t fly for some reason… and it’s important that she fly because of… another reason. So this cute nerdy boy takes her on what I think is a bike. Lmao I don’t know why I’m imagining a blimp / bike. I think that’s wrong. But whatever, so this kid takes her on a blimp / bike and she gets it to fly. And they… deliver… the bread.

GOES AND READS THE REAL SYNOPSIS

Why do I not remember this? IT’S SUPER CUTE. Where can I buy this movie??

Listen… can I tell someone else’s embarrassing story? Like I was involved, but mostly just to enjoy the misfortune of this particular person. I feel like it’s cheating to use my blog to embarrass other people but… I just really REALLY LOVE TELLING THIS STORY.

Okay, so we’ll call this guy… Sam. So Sam was my super close best friend. And we basically did everything together. One of the things we decided to do was go to The Festival of Colors.

If you don’t know, The Festival of Colors or Holi is a Hindu spring festival to celebrate love and life. Everyone gathers together to throw chalk paint on each other and it’s just a ridiculous amount of fun.

We decided to go in the morning because Sam had a date to the Spring Formal later that evening. Why he thought he could do the three-hour drive there and back and still make it to the dance… beats me haha. But here’s the real kicker… they were going to have a day date activity and he actually had white-lied an excuse to get out of it so he could go to Festival of Colors instead. (I want to make it clear that Sam is not a d-bag even a bit and he felt really bad about this the whole time.)

So we get there and immediately decide that we’re going to go ALL IN on this experience. So we pushed through to get as much into the crowd as possible. We had so much chalk thrown on us that we went from lightly sprinkled to a thick layer of brown in like ten minutes.

Then Sam asks a couple of guys to hoist him up so he can crowd surf. Now I’ve been to more than a handful of concerts by then so I know that he’s A) about to be groped and B) about to have his shoes stolen. So I yell to him, “Quick! Give me your shoes! Give me your shoes!” But it was too late. As he desperately tried to untie his shoes, someone else beat him to it. They took his shoes off and threw them on the roof of the pavilion outside of the temple. So those were gone forever. 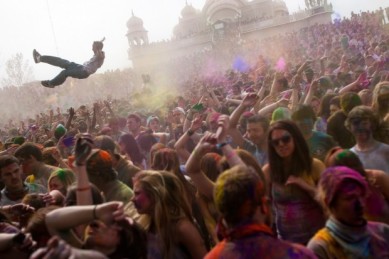 Anyways. We finish out the rest of the event, Sam in his socks the whole time. And then suddenly we realize Woooooah. He is going to be late for the dance

We are FLYING home at the most dangerous speeds I’ve probably ever experienced in a car. We calculate that we would arrive home at the exact moment that his date was supposed to be showing up at his house. Now keep in mind that Sam was trying to keep his attendance at Festival of Colors a secret from her. Also, we were layered in two inches thick of chalk paint.

It’s also important to note that the only way I could convince my mom to give me permission to get that dirty was on the condition that I was not to come home that dirty. So I had planned to take a shower at Sam’s house… which is fine, except for now Sam is like asking me to hide until he leaves with his date so she doesn’t see another girl in a towel and misinterpret what’s going on. Does this sound like a rom-com yet? 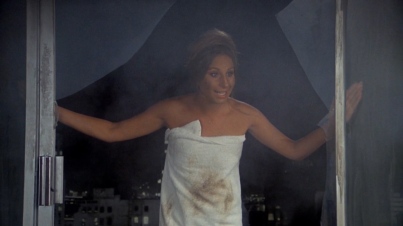 Somehow we miraculously beat her to the house. We rush inside and he yells at me before he hops in the shower, “Run into my room and pick out something for me to wear and lay it out on my bed!” Wait, what? Me??

I don’t even know what I grabbed for him. I think it was a black button-up shirt and a mustard yellow blazer… which I probably dusted with all the crap that was on my hands. The outfit was picked out but then we had another problem… Sam did not have an extra pair of shoes to wear. So he grabbed a pair of his brother’s which were honestly chewed up to hell and I think he would have been better off with socks.

Anyways, despite ALL OF THIS. He somehow gets showered and dressed JUST in time for the date to ring the doorbell. Now I’m hiding out in his room as per his wishes so I did not see the final product Sam that walked out the door…

But about four weeks later the dance pictures come back…

And OH. MY. GOOD. GRACIOUS.

It was obviously a quick shower. Because he was still a bright pink hue. Not only that but he hadn’t gotten the mixes of chalk out from in between his eyelashes, so homeboy straight looked like was wearing liquid eyeliner. He looked like he was trying to go to the dance as the evil genie version of Jafaar. 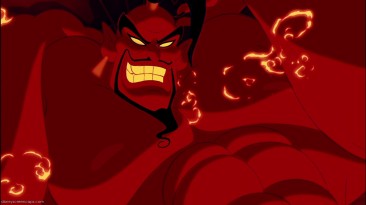 And with the bee outfit I picked out and the deformed shoes. Holy smokes.

The best part is that this poor girl had no idea about Festival of Colors… so I can only imagine what she thinks of the way her date showed up to this dance.

Ah. I love that story.