There is just so much happening right now that I’m not even sure how to consolidate this information into one post. So please forgive the scatter-brained mess this will be haha

Arizona is great and we love it. Even with the summer heat, (I think the highest it’s gotten so far was 113 degrees Fahrenheit?) But tbh, I live the hermit lifestyle anyways and the AC in my apartment is great!

What I would say to someone looking to move down here would be… you like strip malls? Because at least where I live in East Mesa, there are alternating strip malls and gated communities in between a lot of palm trees and cacti. The great thing about it though is you are always in a close radius to any store you could dream of. There’s a department store or grocery store every two blocks and anywhere you’re at you are by a freeway enterance. The design is really smart and this state has everything dialed in. Like OH MY GOSH all the roads are huge!

‘Kay, I don’t know if it’s just the area I’m in, but the people here are either big hit or completely frigid when it comes to friendliness. And (kiiiind of an agist perspective) I’ve noticed that it is totally dependent on age. Like, the younger people in my building complex. Lol… I will straight up make eye contact with them and loudly say, “Hi!!” And they will 100% snub me as they pass. On the other hand, I’ve had several old people stop and talk to me *just because I was smiling to myself*. It’s a funny dynamic. I’m sure my loud, young-person greetings pins me as an outsider even more than my translucent skin color and long pants.

Overall, this place is a big hit for Dan and I. Jack has adjusted very well to our new apartment and has been EATING UP all of the time he gets with Daddy.

Yeah! The pregnancy is going well. I don’t know how I always manage to be pregnant when we move somewhere and end up being the useless lump. Ugh. Carrying Jack is getting harder and I get a lot more tired than normal. But I think that has to do with all the running around we’ve been doing as well. This baby is SUPER SUPER active. I feel twists and turns all day and Daniel can even feel little kicks now. Trying to find a doc is a bit stressful, but everything is going great. Stay tuned for a gender reveal soon!

So if you haven’t seen my last update, my computer blew up. WRITERS. WORST. NIGHTMARE. I ordered a new computer and now I’m waiting for it to arrive. (Typing this on my phone still).

Fortunately, my novel is backed up and safe. If June hadn’t been so hellishly ridiculous I might have my fourth draft finished by now. Buuuuuut nonetheless I am incredibly close. I can see the finish line. Just another round of edits (Oh, just that?? That’s nothing. **SARCASM**) and then TA FREAKING DA, I’ll start beggining door to door for representation.

Here’s something cute: I was in the bathroom getting ready and could hear Dan on the phone with an insurance agent. (He didn’t know I was listening) When they asked what I did for a living, he very confidently responded, “She’s an author.” THIS DOLL I MARRIED WHAT THE HECK! He believes in me so hard! I hope he’s right. And I hope I can kick it back into gear when my new laptop comes.

Oh and PS the cute black laptop that died was named ‘Othello’. I’m considering naming this next one ‘Horatio’, since, ya know, he’s basically the only character that survives in Hamlet. And I’m really looking for a computer who can live to “tell my story”. Haha!

That’s about it. Blech. Sorry. At some point I’ll get back to normal with this blog and put out more embarrassing stories. 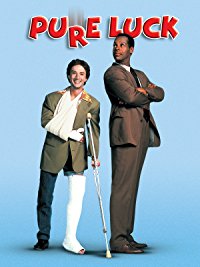 Have you ever seen the movie Pure Luck? Because let me tell you… this move to Arizona has been some of the worst luck I’ve ever had. It’s been so ridiculous in fact that you wouldn’t believe it unless I made a comprehensive list.

So here you are:

Car’s AC went out as soon as we hit Mesquite

We tried to see Hoover dam. It was closed.

Got to the Air BnB late, misunderstood where the entrance was and got chewed out all day for trying to break in

Got two replacement mattresses and a pump… that pump was broken

The flight we purchased for our helpers was delayed like three hours. Didn’t know about it until after they had gone through security

Caterpillars keep crawling in through the bottom of our front door 🤷🏻

Jack had diarrhea for the first week

I spent like 15 minutes picking out the most gentle face wash/moisturizer I could find at the store. I was allergic to it.

Dan’s bike got stolen off our porch

We went to three different restaurants because we had gift cards. NONE OF THE GIFT CARDS WORKED

The radiator in the OTHER CAR broke down

And literally as I was typing up this list, Dan came in to tell me that the plug on my laptop just SPARKED and EXPLODED. So I’m trying to write this post on my phone.

This probably all sounds made up. IT’S NOT. Hopefully, a meteor isn’t about to fall on us. Um… Help?