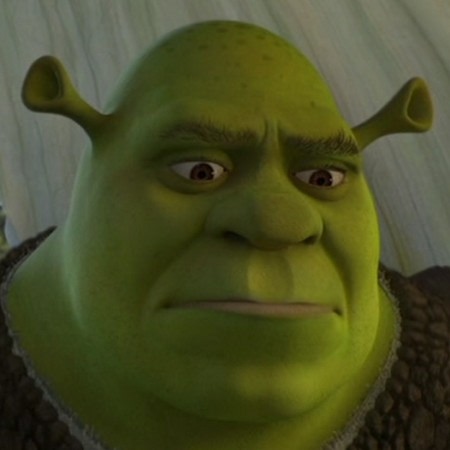 A Short Story
by Val Manwill

Shrek had always loved the stinky swamp with its bad, bitter boulders. It was a place where he felt lonely.

He was a green, scary, muskrat stew drinker with green skin and large hands. His friends saw him as an old-fashioned, obnoxious ogre. Once, he had even revived a dying, legless gingerbread man. That’s the sort of man he was.

Shrek walked over to the window and reflected on his muddy surroundings. Duloc teased in the distance like fighting dragons.

Then he saw something in the distance, or rather someone. It was the figure of Donkay. Donkay was a big donkey with a hideous tail and powerful fur.

Shrek gulped. He was not prepared for Donkay.

As Shrek stepped outside and Donkay came closer, he could see the important glint in his eye.

Donkay gazed with the affection of 3765 ugly fine fairy tale creatures. He said, in hushed tones, “I love you and I want friendship.”

They looked at each other with angry feelings, like two breakable, burnt blind mice saving at a very ogre quest, which had Smashmouth music playing in the background and two shreky uncles swamping to the beat.

Shrek studied Donkay’s hideous tail and powerful skin. Eventually, he took a deep breath. “I’m sorry,” began Shrek in apologetic tones, “but I don’t feel the same way, and I never will. I just don’t love you Donkay.”

Shrek could actually hear Donkay’s emotions shatter into 7420 pieces. Then the big donkey hurried away into the distance.

Not even a drink of muskrat stew would calm Shrek’s nerves tonight.

THE END
Many thanks to the plot generator for this piece of important literature:
http://www.plot-generator.org.uk