This is a series where I try to write the synopsis of a movie BASED SOLEY on my ratty childhood memories of it.

THE INDIAN IN THE CUPBOARD

So there’s this kid… I don’t remember his name, but I remember it’s a really French-sounding name so I’m just going to call him Andre. Andre has, what I assume is a birthday party, where he is given a mysterious stand-alone cupboard by probably his eccentric grandpa or something. He also receives a set of small toy cowboys and Indians.

I’m pretty sure he’s disappointed about these presents and says something like, “I’m not a baby, I’m TWELVE.” Or something. I’m also pretty confident that he is quintessential 90s, with a big drowning shirt, chunky watch and center-parted Backstreet style hair.

So, he’s looking through his plastic toys and for some reason, he puts the *Native American* in the cupboard. He turns the magical and mystical key and when he reopens the cupboard he discovers that his toy has now become a real boy.

Andre figures out that the Native American’s name is … Blackfoot? Little Blackfoot or something? I think he has to figure it out by pantomime. I don’t think that Little Blackfoot speaks any English. Okay so after the whole hey I’m a giant but I come in peace or whatnot, they become the best of pals. And he takes him to school in his pocket and everything. When Little Blackfoot gets hungry he puts a toy deer in the cupboard and even lets him build a fire in his room to eat it. I think he converts a little toy teepee for him to sleep in.

So someone, probably some dopey friend of his, accidentally puts a toy cowboy in the cupboard and turns the magical key. And this cowboy starts to fight Little Blackfoot and wounds him with his tiny toy rifle. Pierre… or Andre… or whatever the heck that kid’s name is, uses the cupboard to convert a toy soldier medic guy. He dresses the wound and saves Little Blackfoot. And I also feel like the cowboy comes around and they all eat the deer together. 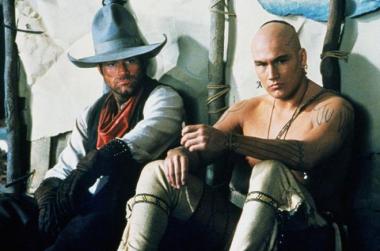 I know there’s some dramatic scene that takes place in the front yard… and I don’t really know how this movie ends. I’m pretty sure, it just ends with him putting the people back in the cupboard one at a time and turning them back into toys. And I think it’s like this emotional good-bye for Andre because it’s permanent somehow??

Or maybe he continues to see Little Blackfoot every once and a while and they remain friends whenever it’s convenient for Andre to bestow him life. That’s probably the ending, I don’t know.

GOES AND READS THE REAL SYNOPSIS