Once upon a time I liked this guy. And really the core reason for the infatuation was that he was just so GOSH DARN FUNNY. He wasn’t even attractive necessarily, but he was to me! Every time I was with him I just basked in the audience of our own private comedy club. I mean he had my heart from the first time he got me cackling like a witch.

So I was NOT about to miss an opportunity to see him. Even if I had the most horrendous death-bed virus. I popped Dayquil like a meth addict because NOTHING WILL KEEP ME FROM THIS MAN’S JOKES.

I meet up with him. Doing everything in my will power to keep from serenading him with “Heaven Must Be Missing An Angel”. And you know what? It was a great time! Everything went off as smooth as could be…

And then we said goodbye.

Uhhhhh… Why do I even tell you these horribly awkward things?

We say goodbye and he drops the granddaddy of all jokes. It’s like every punchline had led up to THIS punchline. It caught me completely off guard and I didn’t even have time to attempt a pretty giggle (which I never ever do anyways). I snort. I forget to open my mouth and the laugh comes OUT MY NOSE. And that’s not the only thing that came out my nose.

I don’t know how you can tell certain shapes by feel only… but I could tell that I had actually just formed a bubble of snot. It didn’t even pop right away. It was brought to life right there on my nostril and was just going to kick it for a while. And I have a big nose, so you know it was not the average snot bubble.

HORRIFIED I pinch it off with my fingers. He sort of reared back in confusion and then kept on talking. I’m like… Did he even see that? Maybe he didn’t even see that… How could he not have seen it? It was right in front of his face!

But here’s the new predicament: I now have a handful of green snot that I had just collected off my face. Okay, I’m not about to wipe it anywhere. That would confirm what he may or may not have seen. So I stick my wet hand into the pocket of my jacket on the sly. I’m figuring I can get to a bathroom just as soon as this guy leaves.

I cleared my throat a couple of times just so he KNEW I was sick and that I don’t produce a Nickelodeon amount of snot every single time. 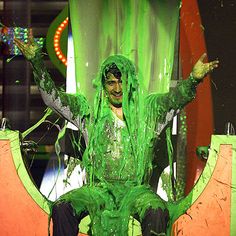 My answer came as to whether or not he had seen it, when he EXTENDED HIS HAND TO SHAKE MINE GOODBYE.

Things didn’t work out with that guy.

If that wasn’t embarrassing enough for you, you can watch me retch on camera trying to eat baby food! My best friend has a YouTube channel and I often guest star. If you like a lot of my mommy posts and baby stuff, then you will love this channel because she has tons of pregnancy and mom vlogs. You should check it out!