Hi, did you miss me?

I KNOW! You thought I was gone for good! You thought you would never have to dust off this old blog ever again. Oh ho ho how WRONG YOU WERE!

It’s actually been so long that I have to re-learn how to format this blog. What is this new layout, WordPress? This is so weird wtf.

I had a lot of soul searching to do. A LOT. (Tell you about it another post) Right now I’ll just give you a little rundown on what I’ve been doing since I ghosted this blog…

September: So this is a forever thing, right? Stay home for the rest of my life.

Yep, just survival mode. But, despite the sad emptiness of this website I HAVE BEEN WRITING. A lot. I mean really A LOT.

March: Journaling through my crippling anxiety

May: Journaling… (wow I now have an actual 400 pages of journaling how did that happen???)

December: … Should I start blogging again??

So now that you’re all caught back up, you can enjoy your weekly awkward story time or whatever it’s gonna be. (I’m not doing a schedule this year because that’s going to ruin my element of surprise.)

Okay. Dang. Things have been rough.

But I am getting back on track now. No more month-long absences. For reals this time.

Remember when I had this clean set schedule at the beginning of the year? Um. Forget about that. Throw that out the window. It’s dead. Unbuckle that dream and step into this dumpy carnival ride of broken hopes

I don’t know where the heck to start anew, so I’m just going to talk about writing first because that’s my baby. . . well, other than my actual literal babies…

So almost every day I get asked if my book is published yet. FOR THE RECORD, I have now created an entire page solely dedicated to my published works. Books that you can buy and read TODAY. But, as far as this one novel. Man. It’s been a hard three years.

Um, writing a book is no joke. It’s definitely a long term relationship with your story. The other day, I went back and counted how many actual times I have written this novel and I basically cried into an open carton of ice cream for the next few hours.

“Identity Crisis Season One through Six.docx”

“The Other Five Percent First Draft.docx”

“The Other Five Percent Second Draft.docx”

“The Other Five Percent – Third Draft.docx”

“The Other Five Percent Merged Draft.docx”

Yup. This is the eighth time I’ve re-written this story. The EIGHTH time.

But it’s not just drafts. It’s a lot of other stuff too. My writing folder looks pretty ridiculous. 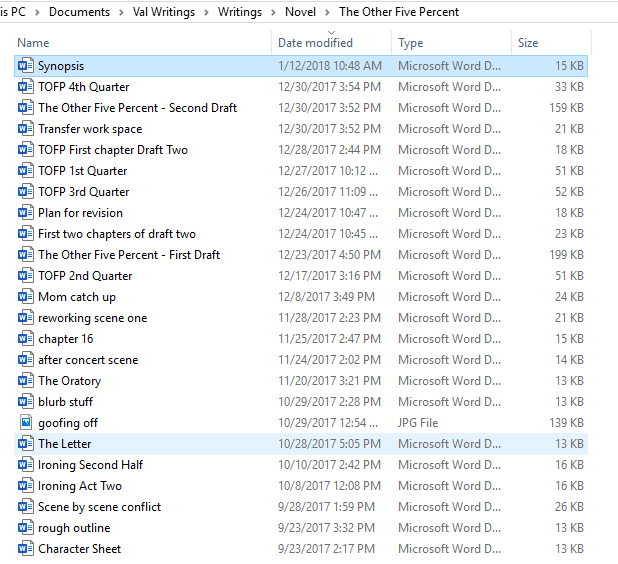 It’s so much work. And like, do I want to make a whole blog post complaining about it? Not really. But I’m just so anxious to move forward with other ideas. I’ve been working here and there on other books and then coming back, so I have all of these other projects that are just taunting me from the sidelines.

Here. I made a helpful graphic, so you could see how much I actually have done… but not done.

Also dozens of short stories and poems that haven’t been picked up or developed yet. It’s a lot. A. LOT. So much that I just feel frustrated creatively. But I’m just so freaking tenacious like I NEED to finish this book and have it be a product that I’m okay with. Even if no one sees it and it was all just for me.

Basically, what I’m saying is, at this point unless an industry professional tells me to re-write… this is the last draft. If it doesn’t cultivate any interest this time around, I’m actually fine with that. I have learned so much writing this book, and I feel that I’ve really developed my craft in a way that would have been impossible without it.

I am only a couple of months away from finishing the editing (probably). Then I’ll go back to querying because I solidly promised that I would do that for myself. And yeah, it would be super easy to publish on Amazon or something, but ultimately getting a literary agent is a goal/hope of mine. And I don’t want an agent just for a gatekeeper like I want someone who can help me sort through the sea of ideas I’m drowning in (see above) … (sea above MUAWAHAHBLABLA).

But look. I updated my book’s artwork since apparently, that’s a thing I do now. And re-wrote my ‘blurb’ since this is basically THE EIGHTH COMPLETELY NEW VERSION OF THIS THING.

What happens when the principal won’t let you quit your school’s honor club? How about teaming up with the school drug dealer to spread the rumor that you’re a hopeless troubled burnout…

Ever since she caught the Student Mentor’s President cheating on her at Homecoming, Elle McKernan is looking for any excuse to get out of her commitments as secretary. When the principal adamantly refuses to let her off the team, she turns to local school psycho Ronnie Gonzales to ruin her reputation and get her kicked off for good! Collaborating with a troublemaker, however, proves to be impossible without making any actual trouble. And to further complicate matters, she finds herself rebounding for Ronnie instead. Will she be able to abandon her mild-mannered ways and step into the new persona she invented? Or will she stay true to herself at the risk of losing the only friend she has left?

Hey, remember when I had a weekly blog and then dropped off the face of the planet for a couple of months?

So it’s been more than two months. I feel bad about that. This is literally the longest that I’ve ever gone without posting anything since I started the blog. (Even after having a kid.) I was secretly hoping for things to settle completely before coming out and having to talk about this. BuUuUUuuUUuuut that hasn’t quite yet happened, so … I’m just gonna talk about it, I guess.

My husband and I play this game when we’re stressed out. I call it, “Lay the Cards.” When we’re anxious about something we come up with four different outcomes.

We look at all the outcomes and try to come up with how we would respond to each scenario, therefore ‘laying out all our cards’ and preparing for anything.

Well, one night we played that game… and the absolute, complete worst outcome that we came up with… ENDED. UP. HAPPENING.

Of all the times we have played that game, that has never happened to us. Never ever.

I don’t want to get into the details of things, because overall I just feel like that’s unprofessional. (Even if it’s not my profession.) But basically what I can tell you is that a situation got to a point where it was completely out of our control and Dan was forced to end his residency only ninety days shy of graduating.

We were told from multiple sources that an early termination from a residency would result in being “blacklisted” from ever getting a job at a hospital or clinic. And if that doesn’t seem so bad, let me concern you by phrasing it another way… You could spend five years of your life, get into an unbelievably massive student loan debt and be told you’re not getting your dream job only 12 weeks away from qualifying.

BUT YOU KNOW FREAKING WHAT?

It’s been six weeks. And Dan GOT A JOB. AND IT IS IN A HOSPITAL BY THE WAY. Let me just rewrite that for any abused lil’ pharmacist. MY HUSBAND GOT A JOB IN A HOSPITAL WITHOUT A RESIDENCY. IT IS POSSIBLE AND REAL TO DO SO. The coolest part about the job is that it’s the exact same company that he wanted out of residency anyway. The un-coolest part about the job is that it’s part-time so… Foot in the door, but we’re still looking to take another job.

Um. So yeah. It’s been hard to write. Upkeep simple things like this blog. In theory, it seems like I should have MORE time to write now that Dan is home to help with the kids. But I’ve been spending all of my free time elbows deep in Google job searches and ad posts. I’ve actually developed a long term twitch in my both my left eye and right eyebrow soooo… yikes? Daniel keeps telling me to write, but it’s been hard to motivate myself to do ANYTHING lately.

It sucks. We have a lot of dreams and plans now idling behind a blockade. We’re likely going to be staying in Arizona for a good long while. But that’s hard to say as we’re still interviewing for full-time positions right now. So, sorry for anyone hoping for the Manwill return to Utah. And sorry for being a buttface and not updating this blog. But lots more news and interesting(?) posts to come.

Read LOVE ME DO from the beginning!
Unlock chapters on my Patreon