My resolution for 2018 has been to “try not to automatically assume the worst thing is going to happen”. And to start out the new year we really put my fears to the test by taking our 18-month-old on a very ambitious vacation.

It’s hard. Maybe it’s a mother bear thing, because eventually you train yourself to predict what will happen with your child. “Don’t play near that table, you’re going to knock your teeth out. Don’t sit on the sofa like that, you are going to fall backwards. Everyone hide all phones and remotes or we’re about to have a meltdown.” As our vacation drew near all I could think about were my disastrous predictions. But you know what? Overall, I will say that my negative expectations were very much proven wrong.

THURSDAY: SHIPPING OFF (AS IT WERE) 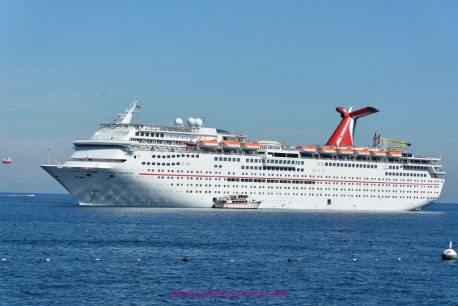 Expectation: Jack will throw a HUGE tantrum on the plane and it will be a miserable two hours.

Reality: Jack did fine on the plane. Everything else went wrong.

Seriously. Jack on the plane, total angel. Trying to get on the plane. PBBBBBBBTTTTTTTHPPPPPPPPT! (In case you couldn’t tell that was me blowing a raspberry with my thumb pointed down) Our boarding pass didn’t print. Security was backed up. My baby food tested positive for bomb material for some reason. (TF!?) The amount of freaking money we spent on a Taxi, I was like, really? Why don’t you just float us across the pacific then for that kind of room and board.

Finally, we made it onto the ship and met up with family. Then I could focus on the SINGLE BIGGEST FEAR of the trip…

Reality: Jack slept so deep that he might have slipped into several comas. I’m not sure

When we went camping to witness the Solar Eclipse… it was a nightmare, okay. We had to take turns sleeping in the car to actually get our child to stop screaming at least. This time, zonked. He didn’t care. He didn’t even wake up through the several announcements and alarms leading up to the mandatory safety meeting. Neither did Dan. The two would’ve gone down with the ship, still synchronize snoring in the cabin.

Turned out, not even a marching band could wake this child. He slept through lights being turned on, he slept through us talking and laughing at normal volume. He even slept through the Disneyland fireworks show which sounded like a full on air raid TBH.

Expectation: We won’t be able to see much of Mexico and have to come back early so Jack can nap on the ship.

Reality: We got to do a day excursion and Jack napped on the go. 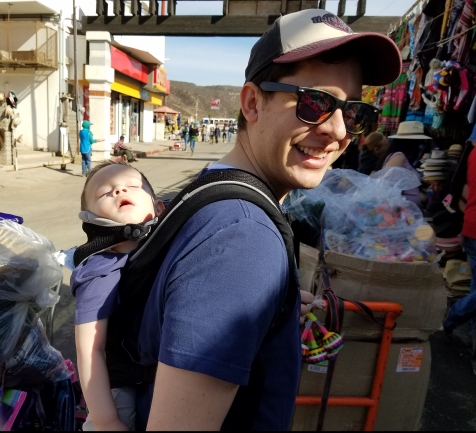 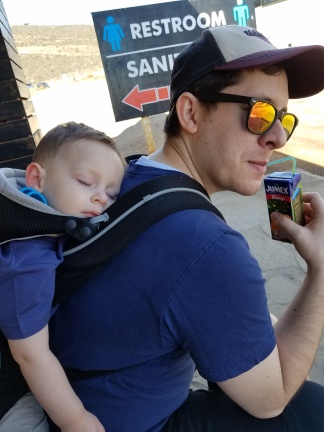 See, I told you about the sleeping thing.

We got to do some street shopping and see ‘La Bufadora’, which is like the Old Faithful of the Mexican coastline. “Really?” No, not really at all actually, but still. AND THE TACOS OMG! If you are wondering whether I purchased a very expensive cruise ticket just for Mexican tacos… then you clearly have never had authentic Mexican tacos. Good day, sir. I SAID GOOD DAY.

SATURDAY: A CHOPPY DAY AT SEA 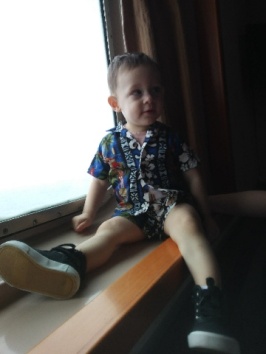 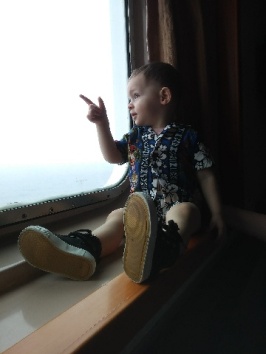 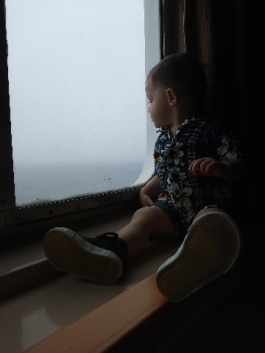 Expectation: It will be rough keeping Jack entertained.

Reality: It was rough keeping Jack from having fun.

All this kid wanted to do was run around. Back and forth, back and forth, back and forth. Lapping the length of the ship over and over. Up, up, up and down, down, dooooooownnn each and every staircase he could find. He had to explore every single inch of the ship. The Casino, the smoking areas, fire station units, stranger’s cabins. I swear, Jack’s dream vacation would be to go to a giant enclosed football stadium, have someone wind up the key in his back and spend the week doing endurance training. It was hard to get him to SIT DOWN. Or you know, step away from the toddler-sized gaps in the railing on the upper deck. 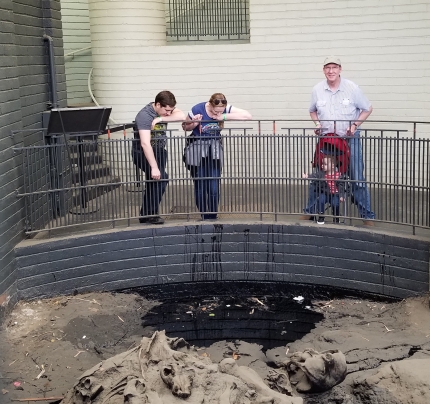 Expectation: We will be twiddling our thumbs all day.

Reality: We did tons of fun stuff. It turned out to be one of my favorite days.

AND IT WAS AWESOME.

Okay, so I had never been to the tar pits before. We ended up spur of the moment going there… I turned into a nine year old boy. I just REALLY needed to see something sink into that tar. So I peer pressured [bullied] my husband until he threw a big rock in there AND IT WAS SO CEWL OMG LIKE SOMETHING STRAIGHT OUT OF AN ODDLY SATISFYING COMPILATION ON THE YOUTUBES!

Afterwards we all had a nice uplifting Sabbath lunch at Hard Rock Cafe. Somehow my baby slept through like 40 minutes of concert-level music. (Why do I worry about things?) He of course later woke up to get in on rocking out. –Hard Rock Cafe is kinda like my thang. So I was very hyper and talkative [annoying?]– 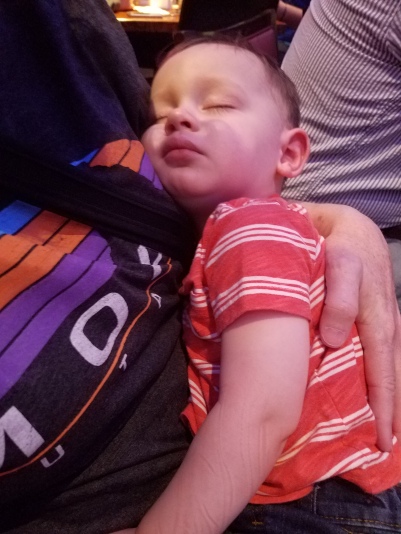 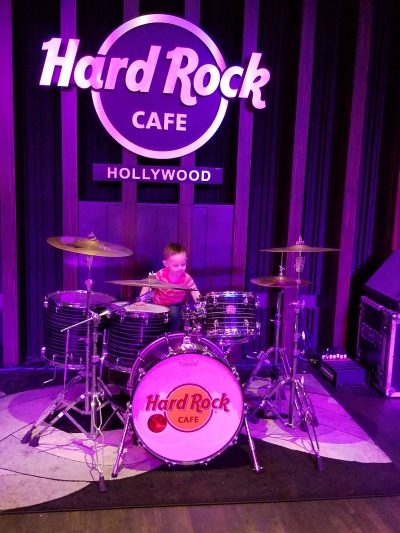 Hard Rock Cafe also happened to be neighbors with Grauman’s Chinese Theater, so we stopped there too because eh, why not?

Expectation: Jack wont be able to do much.

Reality: There was so much for Jack to ride that we didn’t even get to all of it.

Someone once told me that there isn’t a lot for babies to do at Disneyland, but THAT AIN’T TRUE! I think it’s easier to name the rides that babies CAN’T go on than the ones that they can. I can’t say the same for California Adventures but at the OG uhhhh YEAH! It’s a family place for a reason.

Pluuuuus Grandma and Grandpa took Jack back to the hotel for his afternoon nap. While Dan and I got to ride all the big people rides. Yeah, whassup Indiana Jones and the Temple of the Forbidden Eye. Space Mountain I’m looking at you, sailor. It was the best date ever.

NUMBER ONE TAKE AWAY ADVICE FOR PARENTS WANTING TO BRING TODDLERS ON VACATION: Bring other adults with you. Seriously, it was a relief both on the cruise and at the amusement-park-designed-specifically-for-parents-to-enjoy-with-their-children-but-maybe-he-enjoyed-his-nap-tho-shuttup. 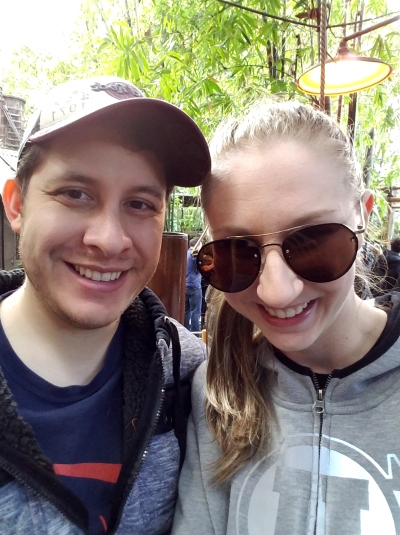 TUESDAY: DISNEY BEFORE THE TREK HOME 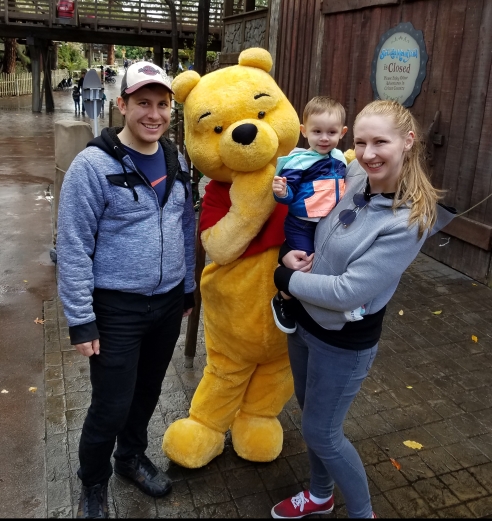 Expectation: Disneyland would be rained out and half closed.

Reality: It was ABSOLUTELY the most darling and wonderful Disney day.

The days we went to Disneyland were the days California decided to flood.

We were gearing up for our underwater Disneyland tour, when guess what? It turned out to be a perfectly sunny day. (And the crowds were frightened away too) Walked on to every ride, had a marvelous time. And OH NOT TO MENTION. Jack just happened to meet his hero after riding the Winnie the Pooh ride a few times in a row. 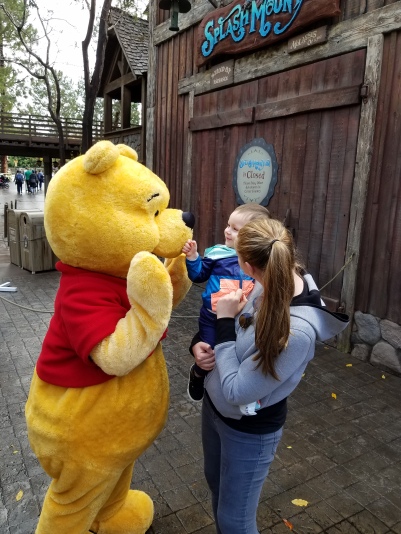 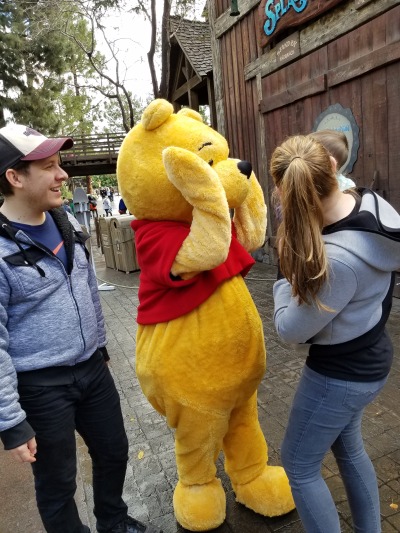 Let’s play a game, who is more excited to meet Pooh. Jack or Mom? 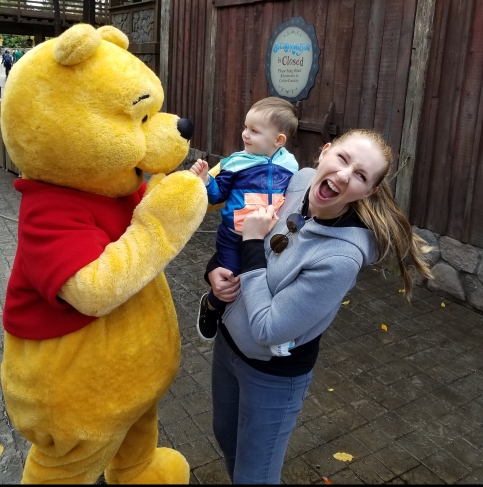 It was a lovely trip and here’s my takeaway… That scary thing you’re thinking of doing? Look, you should just do it. It’s likely that your expectation of an EPIC FAIL may actually be just an expectation and nothing more.

3 thoughts on “Taking a Toddler to Disneyland AND a Cruise”